It’s official – Antmicro on board of the Parallella team

You might have seen it already if you are a backer of Parallella – last month we managed to help the great guys at Adapteva resolve a big hurdle on their road to delivering a fantastic, manycore development platform to their backers. 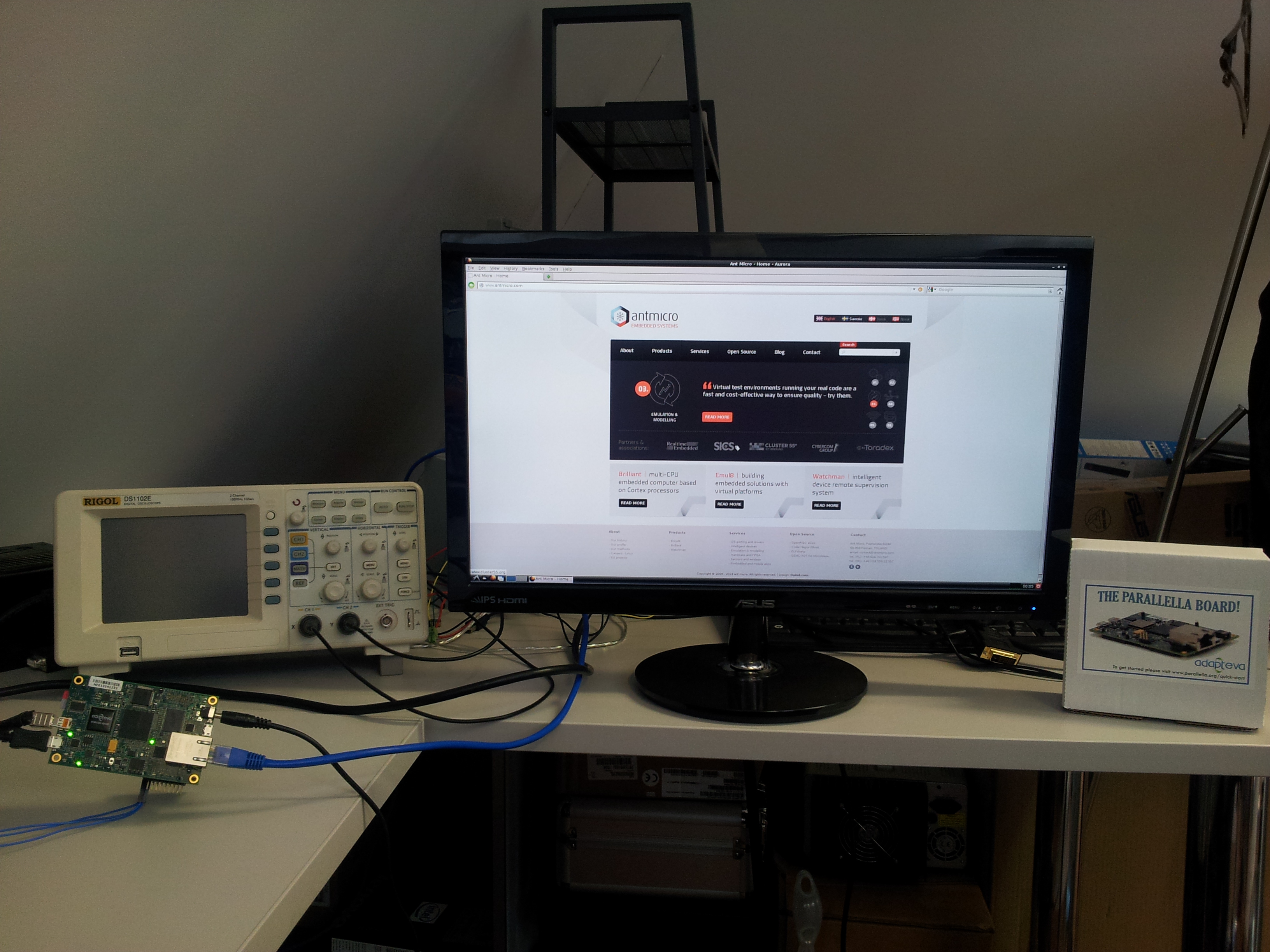 We originally heard of the project when it was already being Kickstarted – and loved it from the first moment. We actually immediately came in contact with Andreas, the face behind it all, through a mutual friend at Halmstad University – and tried to support the project the best we could. Of course, we also bought some for ourselves :)

If you don’t know what Parallella is, guess:

a) a ridiculously cheap ($99) Zynq (Cortex-A9+FPGA) board
b) a devboard for a powerful Epiphany co-processor, aimed at letting any developer prototype manycore algorithms and programs
c) a great, community-funded open-source, open-hardware platform
d) all of the above

How it all came about

By now you can probably see we were (and still are) very excited about the platform, the world however turns round, campaigns end, and with our own budding projects to take care of we did not follow the project very closely, hoping to get a board at some point to see what it is capable of.

In the meantime we continued to work with the Zynq CPU, assisting our partners at Enclustra – who provide a great industrial Zynq and FPGA module offering – in their software support. We also laid our hands on some Zedboards, because why not.

So when Andreas reached out for help with the Parallella HDMI output – which seemed OK but just did not work – we were glad to take a shot. Especially that it meant getting one.

Yes, the board is there, we have touched it, and we have helped fixed it.

Aside from the minor glitches, already eliminated the upcoming version which will be the one to ship to all backers – Parallella beats all other devboards hands down. A dual-core Zynq board for $99 with a powerful, open-source friendly manycore co-processor. And now – also with Linux supported by Antmicro.

We were invited by Andreas to cooperate broadly on the software side of the platform, to which we readily accepted. You can never have enough software support. We will be doing our best so that Parallella excels in this area.

Our participation in this project is as official as it gets – we are now part of the github organization for Parallella.

We were also invited to write up a post on the Parallella blog on some more backstory on how this all came about as well as some details on how to perform some hardcore HDMI debugging where you’re looking at hardware schematics, FPGA bitstreams, cables, LCD screens, oscilloscopes and a load of software at the same time, trying to get to the root of the problem. And the joy of getting to it!

Over the next weeks you will see some activity on the Parallella github, as well as more info as to how we will proceed with the SW support. You will also see us scourging the Parallella forums, trying to get up to speed with the community.

By the way, if you don’t have a Parallella – you can still pre-order one!