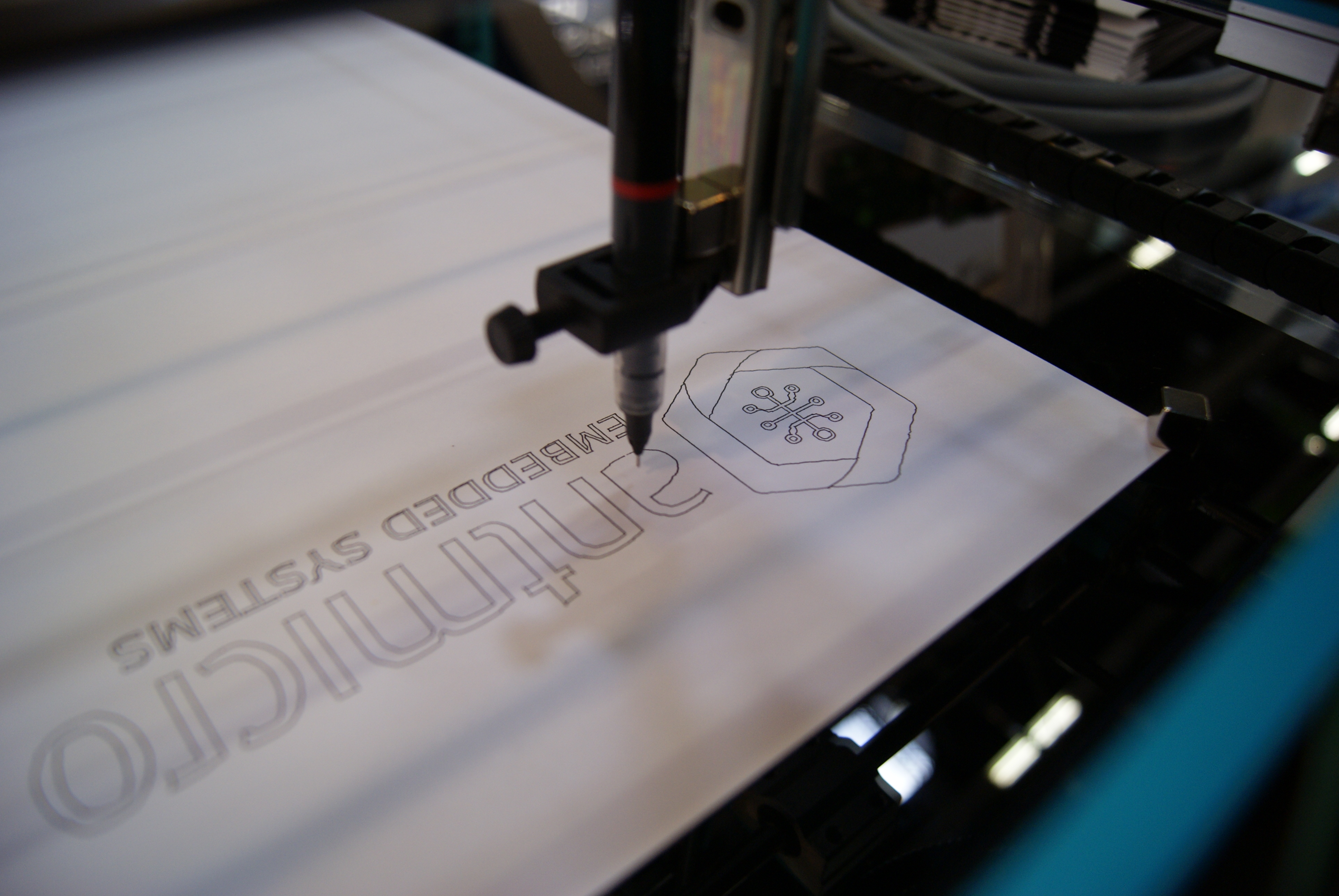 As mentioned in the previous note, we decided that Antmicro should make itself seen at this year’s Embedded World. We were succesful to the point that we have not had any time to update the blog since (which, starting with this note, is about to change)!

This year we were present at four booths, which meant driving to Nürnberg in two cars full of people and embedded goodness! Adding to a booth with Enclustra like last year, we also showed a fantastic Linux+eCos operated plotter demo with our other Swiss partner, Toradex, on two of their booths (more on that later); to top it off, one of us was also present at the booth of Parallella, to spread the word about open parallell computing for everyone in Europe.

The Toradex demo was the finalization of the joint effort to provide a first fully open-source software stack for their heterogeneous dual-core Vybrid ARM computer. Essentially, a Cortex-A and Cortex-M built into one CPU, with the advantages of both, no compromise. 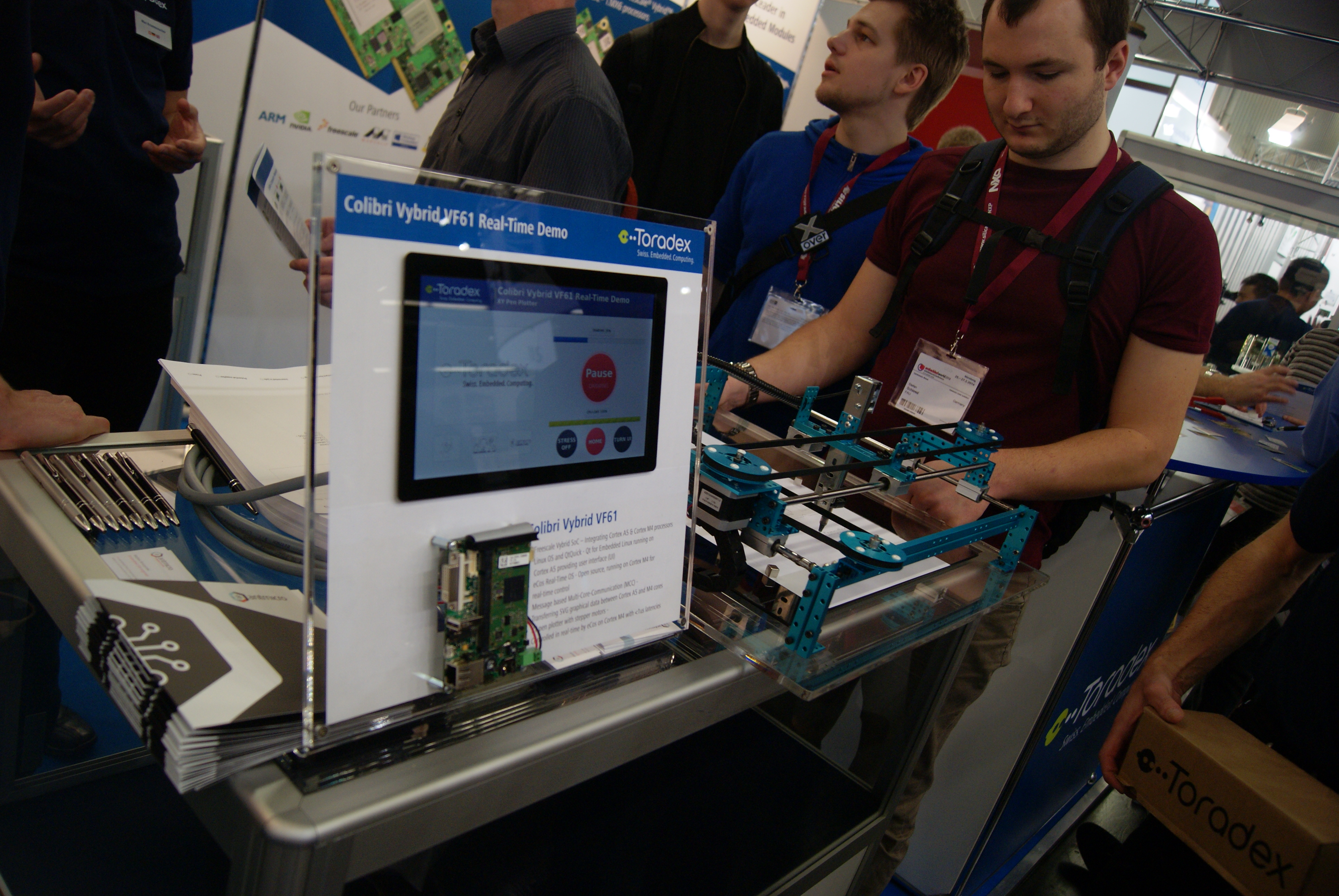 What this means is that using a dirt-cheap industrial-grade module from Toradex, you can drive your real-time application, represented in the EW 2014 demo by a pimped-up DIY makeblocks plotter from an RTOS like eCos, while at the same time you can roll out a fully-fledged Linux GUI using another core of the same CPU. And it all just works.

A brief how-to for eCos on Vybrid can be found in the Toradex developer centre, and both a Linux BSP and the eCos port are freely available from Toradex’ git repositories. The demo itself is available on github.

You can read the full press release at the Toradex website. 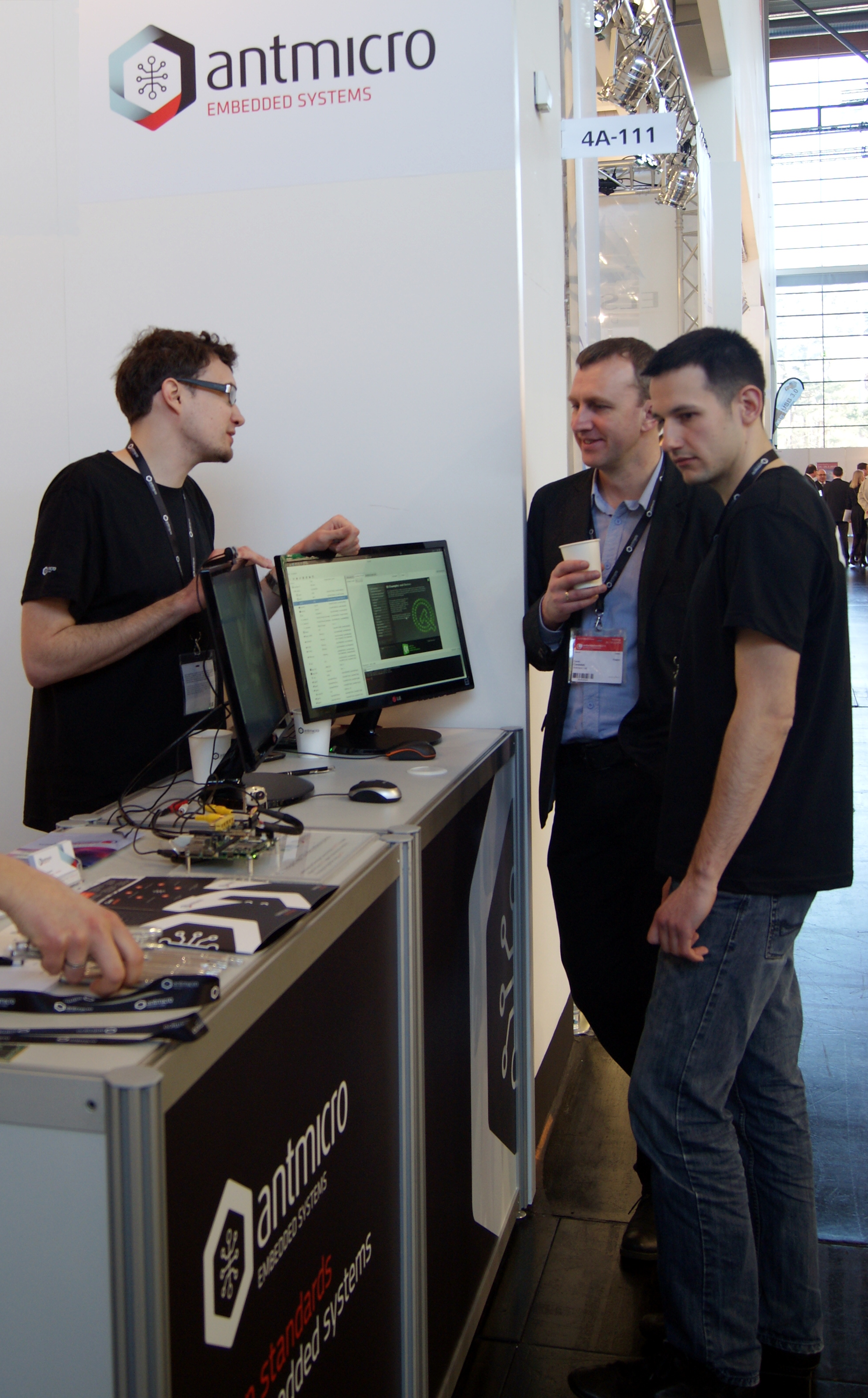 While the plotter demo attracted a lot of attention, it was by far not the only thing we showed this year. Since the demo was developed with the help of Emul8 (itself is a joint project with Realtime Embedded), the thing called for a meta-demo: this is how we ended up we presenting the exact same Linux+eCos setup running in a virtual environment on a PC.

Two virtual interconnected embedded OSs running on a PC is not something you see every day, and a lot of people stop at our booth to ask very interesting questions. Generally, programming dual-core heterogeneous systems is a good use case showing the need for emulation software like Emul8 – you can see what is happening to your software and hardware, debug and test it much easier than on the physical embedded board(s).

Since space allowed it, we also showed a small demo of vision processing algorithms, an application area we have seen develop quite rapidly with the increase in computing power and possibilities of embedded CPUs. This one also used Toradex hardware (you can see it on one of the photos) as well as OpenCV and Video4Linux software + drivers developed by Antmicro. 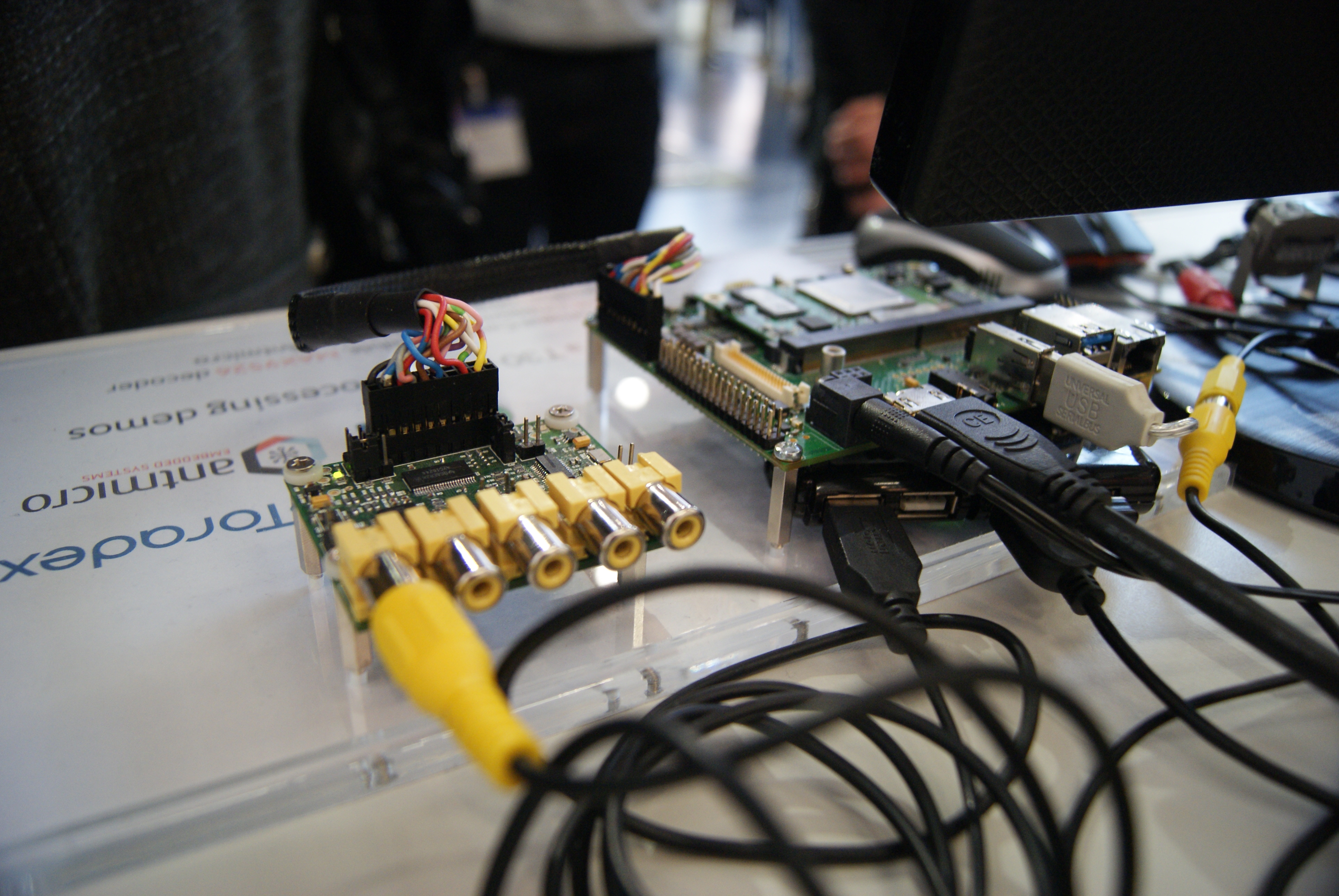 In hall 5, we exhibited yet another side of our activity. The massively multi-core chip from Adapteva we helped push out to the world in the form of the Parallella board was also a big attraction, shown off on multiple screens. A lot of people showed up and expressed their support, and Parallella meetup one evening gathered a small but enthusiastic crowd where talks about possible use cases for Parallella continued late into the night.

From general remarks about this years’ Embedded World, one thing that struck us is how much the term “Internet of Things” is used in a lot of contexts, as an umbrella term for quite a few different things. Some companies really want to connect everything to the Internet; others would prefer to form gateway-centric networks yet still reasonably argue that this is an Internet of Things, while yet others have simply detected a new trend and put “IoT” on their booths just to be safe. 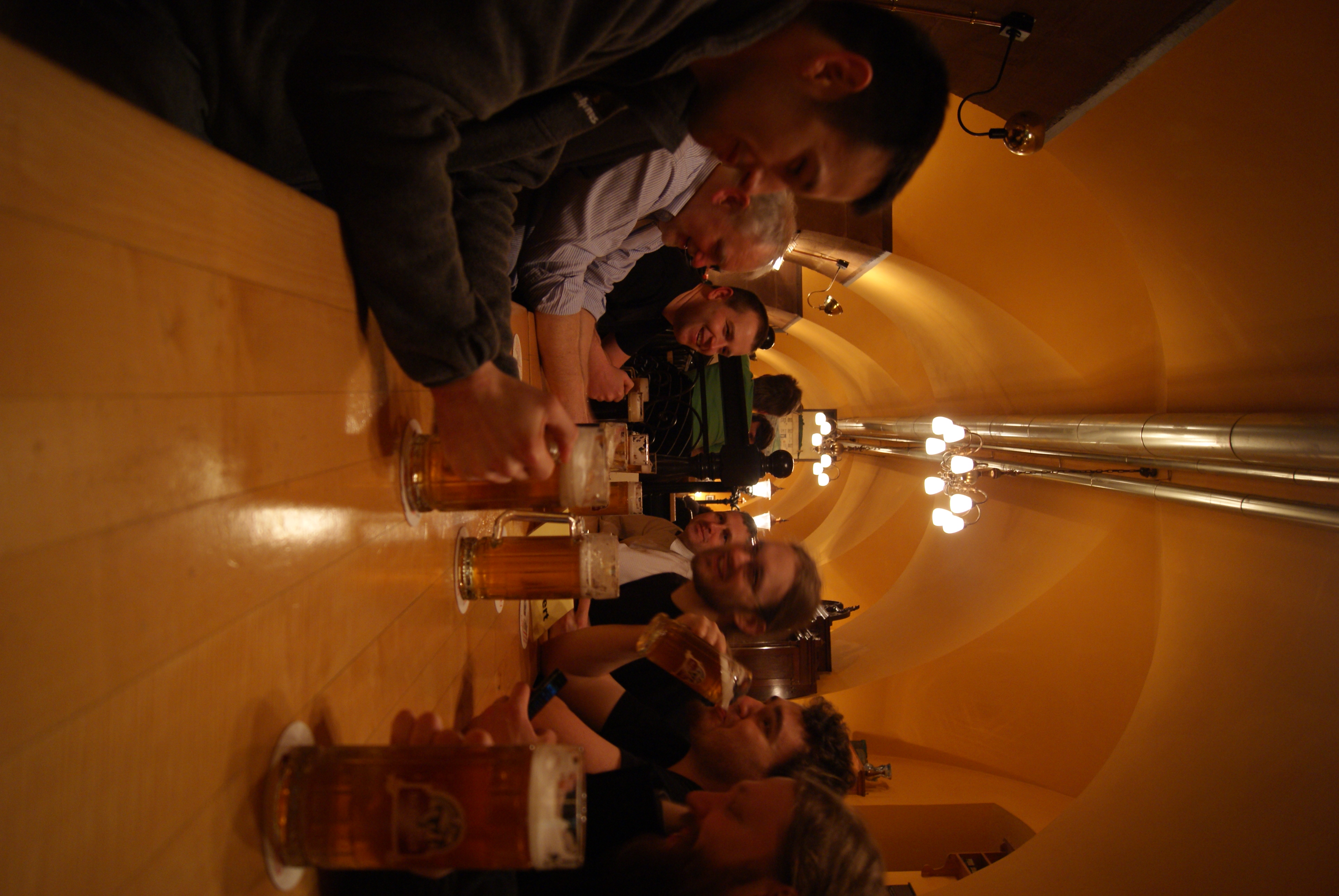 Reminds me of my talk at ECS 2013 about what challenges IoT really brings to embedded development – the omnipresence and occasional misuse of the word shows that people are aware of the aim (Ericsson’s 50 billion to Intel’s 200 billion devices by 2020) but not how to achieve it.

Overall, this was a very exciting fair, and we were happy to attend in large numbers – expect the same or even more next year!