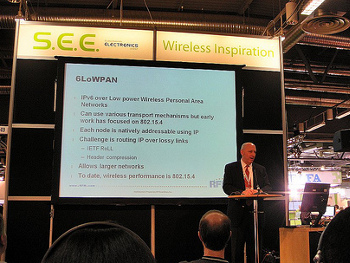 The Scandinavian Electronics Event is a new addition to the map of fairs and conferences related to embedded systems (even if its scope of interest is broader). It is scheduled to be a biennial event – the first took place between April 13-15 2010, and the next one is scheduled for April 2012.

The visitor count perhaps did not live up to the expectations (compared to, say, Embedded World there was a lot of breathing space) but that does not mean the SEE was a failure. On the contrary, it was a good opportunity for many people in the industry (including us!) to learn about where we are headed, to strike up new, valuable contacts and eat free fo… er, gather information on new products that are being developed in the cold North and elsewhere. The panels were mostly interesting, with a good deal of lectures about wireless technologies – a look at the timetable was enough to see what is in vogue.

We will definitely be attending the SEE in 2012 if time allows, and we encourage you to do likewise if you want to see how Scandinavians go about what they do – professional and open even if a bit restrained. And that is precisely how I would characterize the 2010 SEE.