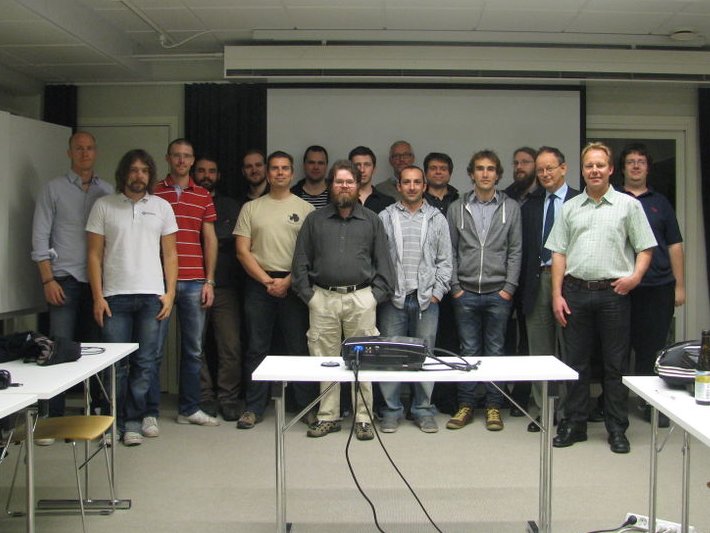 The great thing about open source communities is that hundreds of people around the globe can collaborate on fascinating software and hardware projects without ever meeting one another.

An even better thing about such communities is that they can also meet up and discuss their shared fascinations!

Last weekend a part of the openRISC community (including us) did just that, at a fantastic meetup hosted by our partner – Realtime Embedded – in their office at Sveavägen in central Stockholm. The three of us attended as relative newcomers to the openRISC bunch, some of whom have been out and about for many years now, but I think we managed to arouse much interest with our presentation of eCos as a new addition to the openRISC ecosystem. We were pleased to hear a number of insightful remarks and requests; as one of the never-too-many actively supported OS’s for the openRISC our eCos port got also quite a few mentions during the other presentations.

We have already started putting the suggested changes into life as time permits us – check Peter’s description how to compile a program in eCos in an (insanely) easy way! (Makefile included.) In the nearest future, watch out for new eCos for openRISC notes.

Unfortunately, as Murphy’s Law would have it, our presentation was not recorded due to a technical glitch – damn you, AAA batteries! – but you will soon find the slides on the project meeting website.

As for the other presentations, all of them were very interesting to listen to but one of them, a status report on the (now functional) dynamic linking support for openRISC LLVM by Stefan Kristiansson – was absolutely brilliant. The best moment was when the boring slides ended, and… check out what came later at the extremely cool demo. (The other videos are easily found in the attached playlist.)

Don’t trust Stefan when he says “I don’t know about this stuff for real” :)

The meetup was also a very good forum to talk about our priorities, open source processes in general and other related interesting developments – including Parallella from Adapteva, which we are very excited about. For those of you who don’t know the project, it’s an attempt to raise $750000 (or more) by giving away development platforms (called Parallella) for an already complete 16-64 core (called Epiphany) to as many people as possible for as little as $99. We love the idea, since the guys at Adapteva have from the beginning been very open about their history, process and willingness to actually get people to find the proper applications for the hardware, not the other way around!

See the short pitch I prompted for Parallella at the openRISC meeting, by Jeremy Bennett from Embecosm:

And buy one yourself to get parallel computing out into the open!