At Antmicro we truly believe in bringing technology closer to people – sometimes literally. From this belief, shared by our partner VOX one of the leading Polish furniture manufacturers and part of The Human Touch Group the idea was born to use sound and movement to bring furniture to life, using VOX’s brand new furniture collection – VOX Smart.

VOX Smart is highly customizable, and children and teenagers may modify almost every detail of their interior adapting it to their needs. The collection aims at introducing children to the world of DIY, by exposing young users to adjustable appliances in a friendly environment. Its name clicks well with the new dimension given to the furniture by adding a touch of technology built here at Antmicro combined with the psychological and educational background provided by the Human Touch Group.

The effect can indeed be called a ‘Smart’ object. 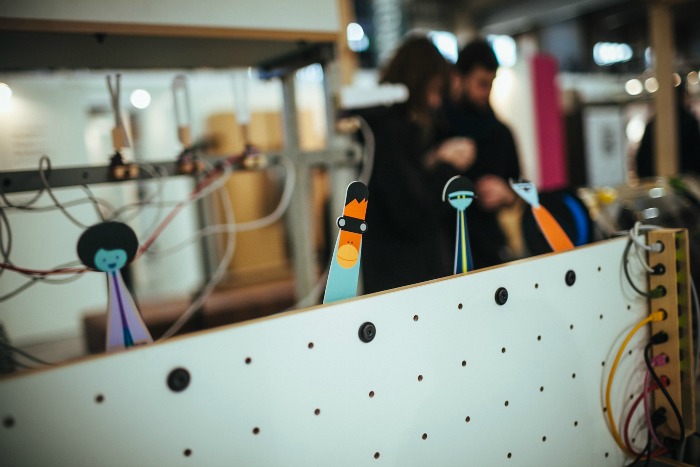 Our task was to redesign a simple proof-of-concept prototype into a professionally looking platform so that it may be mounted above the desktop and stay connected with various external devices which includes servos, diodes and photoresistors. Mini jack sockets connected to some simple processing hardware are used for sound analysis, and for the comfort of the end user we decided to use a common 8P8C Ethernet cable for connecting the MCU with servo motors and tricolor RGB diodes. In order to connect to multiple endpoints we had to install RJ45 sockets in place of place of originally mounted pin headers.

Servos are used to move various functional and ornamental elements (e.g. boards or figurines), and flash a set of diodes to the rhythm of music supplied externally – through e.g. a smartphone.

The technology was successfully displayed at the Poznan Furniture Fair, gathering a lot of interest and very positive reactions. People connected their smartphones to see how the device would react to the music, and danced along with the figurines. That was the exact result that we had wanted!

The project will be continued with further psychological and sociological studies and a first product should come to the market later this year.