In the recent months, we have been working on a growing number of projects focused on access control and fleet management with sensor data logging combined with GNSS positioning. To address the recurring demand for a versatile platform and speed up the development of early prototypes for Antmicro’s customers, we have designed an open hardware baseboard for the Qualcomm Snapdragon 625 System on Chip (SoC) that adds to our portfolio of open hardware. The release of this latest baseboard follows in the footsteps of our earlier Snapdragon 845 Baseboard, which sparked a lot of attention as soon as we presented it to the public in a blog post a few weeks back.

Our open source Snapdragon 625 Baseboard supports Quectel SC606T System on Modules. Taking a closer look at the chip itself, the Qualcomm Snapdragon 625 is powered by an 8-core ARM Cortex-A53 64-bit CPU and an Adreno 506 integrated GPU. The default chip version comes with 16GB eMMC + 2GB LPDDR3 memory with up to 64GB eMMC + 4GB LPDDR3 available, as needed to match your use case. The SC606T SoM sports a wide set of other features; among them, the most crucial are USB, CSI, DSI, GNSS, 2.4/5 GHz Wi-Fi, 4.2 Bluetooth, an LTE Cat 6 modem and an LCM with touch panel support. The chip itself also contains many built-in video and audio codecs and allows for encoding in 4K at 30fps or 1080p at 60fps.

The SoC is fabricated in the 14nm technology, which provides a very good performance to power consumption ratio, making the platform suitable for battery-powered applications.

In order to utilize the potential of the Snapdragon 625 SoC for portable embedded applications we have designed a baseboard which combines a multitude of IO interfaces within a small outline and a minimum total thickness. That makes it an optimal choice for handheld devices, car dashboard assistants and smart wall-mounted panels. 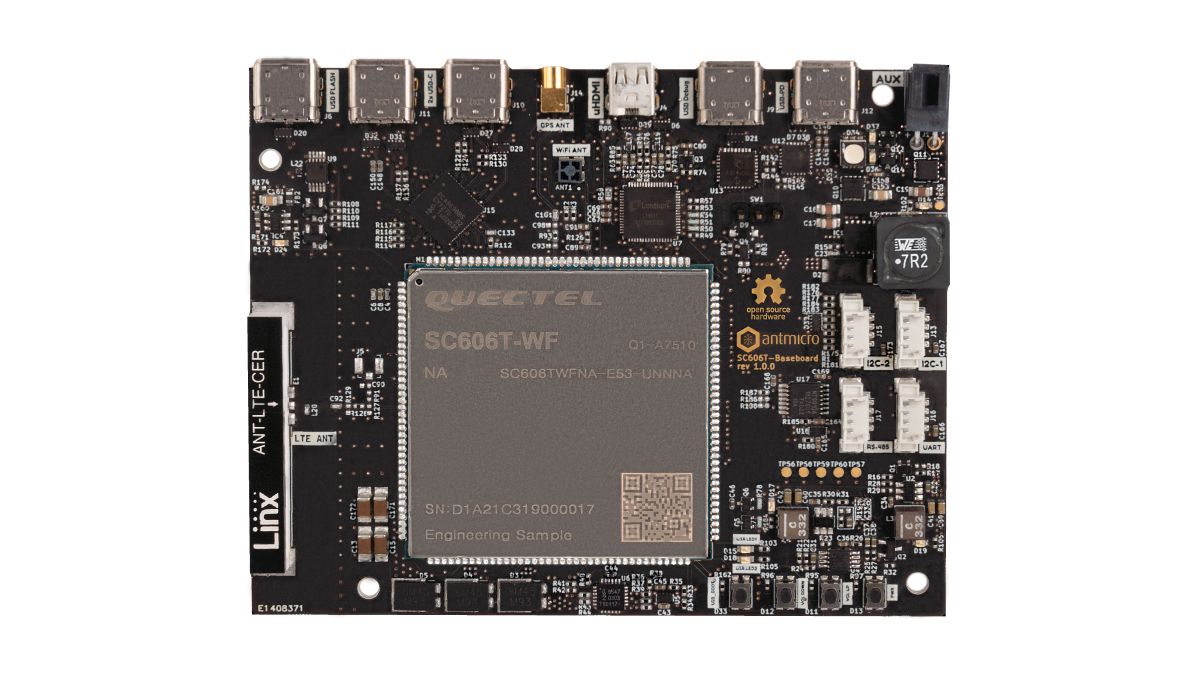 The baseboard’s outline is 100x80mm (or 4x3.1”). It is worth noting that the SC606T SoM is offered in an LGA package which is suitable for soldering directly on the PCB so the overall thickness of the populated baseboard can be as little as 5mm (0.2”).

The IO connectors on the baseboard are grouped along one edge so it’s easy to use as-is in initial Proof-of-Concept installations, as well as a desktop device for software development and validation. The latter is facilitated by a debug console and an dedicated interface for flashing the SoM exposed on separate USB-C connectors.

The baseboard supports multiple power-supply scenarios including USB-C (with Power Delivery controller) and a regular DC connector. An on-board power-path controller enables dynamic switching between available power sources, while the external DC connector allows the baseboard to be integrated with a battery pack combined with a matching charger. Additionally the baseboard is equipped with a built-in under-voltage, over-voltage and reverse polarity protection. The baseboard can be easily validated as part of a kiosk or handheld device.

The SC606T SoM includes several radio interfaces: matching antennas for WiFi, Bluetooth and GSM are located on the board, whereas the GNSS antenna port is exposed on a compact MMCX connector so an external antenna can be used.

The Snapdragon 625 Baseboard includes an SD card slot which allows to easily expand the amount of external storage, and the SD card can be replaced with an eMMC IC during a simple hardware redesign.

Antmicro’s open source Snapdragon 625 Baseboard is now released on GitHub under the permissive Apache 2.0 license and ready for us to customize for your needs.

A variety of interfaces

The Snapdragon 625 Baseboard exposes most of the IO interfaces offered by the SC606T SoM.
There are two USB-C connectors exposing USB 3.0 interface in host (i.e. downstream-facing) configuration. Those USB ports are handled by an on-board USB hub, which also switches USB-downstream lanes to each port regardless of the orientation of the USB-C plug.

External sensor data can be collected over UART, IC2 and SPI interfaces exposed on separate connectors located on board. Additionally there is an on-board RS485 transceiver to communicate with MODBUS-compliant devices such as external controllers, HVAC devices and the like.

The SC606T SoM offers two independent MIPI DSI interfaces. One of them is routed on a generic FFC connector whereas the other is converted to HDMI with a Lontium LT9611 bridge. This configuration allows using the Snapdragon 625 baseboard both with regular HDMI monitors and with embedded displays also with touch panels accessible over I2C.

The SC606T SoM exposes three Camera Serial Interfaces (CSI) with two of them working independently. We have re-routed those interfaces to our standardized 50-pin FFC connector. That makes the Snapdragon 625 Baseboard electrically compatible with a variety of open source video accessories developed by Antmico - such as sensor boards like OmniVision OV9281 Dual Camera Board or video converter boards like the SDI-MIPI Bridge or the HDMI-MIPI Bridge.

Over the past few years Antmicro has developed numerous machine vision platforms targeting different fields of industry, agriculture, transportation or medicine. We help our customers in building products that integrate video sensors and camera modules from Allied Vision, Framos, Sony, Aptina, OmniVision and more. If you are looking at any particular sensor type, optics, resolution or desired frame rate, the openness and flexibility of the Snapdragon 625 Baseboard - and other open platforms from Antmicro - serve as a perfect starting point to select a solution that will be tailored to your project’s actual needs.

The SC606T SoM is distributed pre-flashed with a Yocto Linux (Kernel 4.9) distribution with source code provided including support for most of the peripheral interfaces included in the SoM and exposed as on-board IO connectors. On top of the base image we can build customized Yocto-based Linux-based BSPs to support your product, integrating a wide array of Linux tools, libraries and frameworks that we work with on a daily basis.

It is worth mentioning that the SC606T SoM has a SC600 counterpart which runs Android, another popular open source operating system we also help our customers adopt for their devices. Both modules are pin-compatible, include the same Snapdragon 625 SoC and can be easily re-flashed with the updated OS image using the on-board USB port which supports the on-the-go functionality.

Regardless of whether you are using Android or Linux, we can develop custom drivers and OS integrations for you, as well as support your with creating custom UIs and OTA update / fleet management systems. Thanks to our expertise in building smart cameras and advanced machine vision systems, we can also develop edge AI solutions on top of the platform by utilizing the on-board GPU.

A compact platform driven by a Linux-capable SoM makes Antmicro’s open source Snapdragon 625 Baseboard an optimal solution for a variety of applications - and with multiple IO interfaces coupled with Cat 6 LTE modem and storage, it’s the perfect choice for IoT gateways, data loggers and industrial controllers. The acquired sensor data can e.g. be tagged with position obtained from the on-board GNSS receiver, stored on an SSD drive and sent off the cloud using the built-in LTE modem.

If you connect image sensors over CSI, the Snapdragon 625 Baseboard can also collect video footage, which expands potential application areas towards access control and automated inspection.

The Snapdragon 625 Baseboard supports two independent display interfaces suitable for building smart screens and KIOSK devices with either HDMI or MIPI-DSI. The baseboard can be easily converted into a battery-operated device for mobile and hand-held devices such as smart scanners, UAVs, electric scooters, cleaning robots, connected up into a fleet of multiple nodes, controlled with an integrated, cloud-based management system - a typical scenario for many of our customer projects.

The Snapdragon 625 Baseboard can serve as a perfect starting point for an initial proof-of-concept and can eventually be redesigned by us to meet your project’s requirements - this applies to adjusting IO connector types and locations, altering the mechanical arrangement or adding any additional peripheral interfaces such as imagers, video converters or battery management units.

From the software perspective, Antmicro offers a broad range of services for BSP development, customization, implementing advanced security features and handling managed updates for a fleet of devices. Building customized system images - complete with edge AI solutions - can be greatly simplified with our cloud-based build systems and cloud processing infrastructure for the collected data. If you are looking at Snapdragon 625 as a potential SoC to drive your new device, or are interested in any of our previous designs, such as the Jetson Baseboard, don’t hesitate to contact us and see how our open, scalable solutions can be leveraged in your next project.